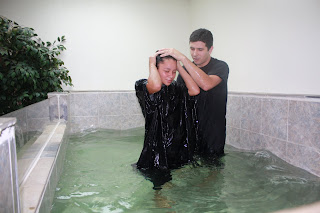 Last Saturday I had the privilege of baptizing 7 youths from our YPG headquarters here in Houston, Texas. It was my first baptism in water ceremony in this particular youth group. In fact, the first of many. It's so good to see young people giving up on this colorful and deceiving world in order to serve God with the best they have, their youth. Baptism is faith in action. I can only become a true child of God through the baptism.
Until then, I am a mere creature, just like everyone else. There are many youths who avoid doing so due to the seriousness of such ceremony. They know that one must be ready to turn his back on the world and follow God. The question is: do they want to let go of the world? No. The thought of not going to parties, night clubs, getting high, drinking, sleeping around is too much for them.
They can't picture that. It's too much to handle. They say: how can I survive in this world without my friends? Oh mindless generation! They think life with God is dull and tedious. Anyway, it's a matter of choice. My friends gave me nothing. When I came to church they were no where to be found. I frequented night clubs almost every weekend and it added absolutely zilch. I chose to surrender. Just like when a UFC fighter is getting battered by his opponent and he has to tap out. I tapped out! I could not live my life without God anymore. Hence I got baptized.
How about you? Are you willing to tap out or you'll try to remain standing while the world beat the hell out of you?

That is very true! I too get glad, when youths decide to turn their backs to this chaotic and deceiving world and turn to God. You are right, the best years that a person can offer is their youth. When they are full of energy and willing to learn everything that comes their way.

I too just got baptised this Saturday Novermber 21st. This is my first step to a committed life to God. There's no turning back now :)