I just came across what must be the most biased manipulative article based on recent "research" that I have ever seen.  The research was done by what is known as a scholarly journal of over 100 women involved in the pornography industry, who are compared to the same amount of women who are not.  It based its claims on what the women had to say about their feelings and opinions about various aspects of their lives.  The conclusion of this journal was that these "actresses" have a better quality of life than the ordinary woman not involved in pornography.

After 26 years of counseling and caring for families, couples and women, in particular, from all over the world, I can categorically say that this supposed research is baloney.  Not only that, but it was done purposefully to encourage more degradation to women, to marriage and indirectly to everyone.

Why would they say then, that they are so much happier and content with their lives?  Women who have been deeply wounded and deprived of a loving home as they grew up can easily fall into this trap of seeking out affection through promiscuity.  If they are surrounded by enough people to praise and glorify what they do, they can easily fool themselves into believing that this is what they really wanted all along, that this is their way of self expression.  They desperately want to be happy and valued, so if it's offered them through money and the adoration of others, no matter what the motive, they'll take it.

A woman in our Rahab group in England was once a prostitute for very high-end clients in London.  She told me about the money, the jewelry, the clothes, cars, expensive gifts, hotels and restaurants that she would frequent, and how she and the others in her brothel boasted about their great lives, compared to those pitiful ignorant wives of the clients that they entertained.

"But you know," she confessed, "None of us were really happy.  Everyone felt lonely and disgusted with themselves, and that's why so many turned to drugs and drinking to deal with the emptiness.  No one was a true friend.  We hated ourselves, so how could we care about anybody else?  All that big talk about how happy we were and how much freer and luckier we were was just talk to hide our real feelings.  I'd see some of them break down and fall into suicidal depression, but others just kept up the act and got tougher and meaner.  When I finally left that life, no one cared and in fact they were glad to have me out of the way..."

This is the reality that I have seen with the women I've known caught up in this kind of life, from strippers to prostitutes to even "actresses" of this nature.  And what do actresses do best?  They pretend to be what they're not.  Good actresses in theater and film can leave their character behind when they go home, but the poor women involved in this industry often cling to a fantasy life, pretending to be happy to mask their emptiness. They've found a way to make a comfortable living off of being damaged.

One young man I counseled was convinced that the girls he saw on those illicit videos really liked what they were doing.  No, I told him.  You are participating in abuse, in degradation, each time you watch this.  Don't believe their smiles or their boldness - it's an act to cover their shame.  If you pretend you're not ashamed, does that make the shame go away?  These girls hope it's true, and keep trying to drown it out.

God created us to enjoy - not just confine ourselves to, but enjoy - purity, respect, and love for His ways.  The fact that there are so many unhappy women who are not in the porn industry doesn't mean that they are living the way that God intended, otherwise they would be much happier.  Women, men, anyone who lives in the power and presence of God finds far more happiness, success and fulfillment than those who don't.  The world, even with all of its problems and evil, becomes a brighter, more joyful place because you are always in His light.  Romantic relationships are intensely more pleasurable because they are based on honor, sacrifice, faithfulness and commitment, and they grow and develop as years go by.  Children grow in strength and wisdom because they witness a stable, loving home where both mom and dad are present every day of their lives.

So we have a strange phenomenon.  Women who have brainwashed themselves into believing they enjoy being paid to be abused and objectified, while others who choose a conventional life dislike themselves and feel unfulfilled.  What this says to me is that the entire world has drifted so far from God's original plan, that it's time for a radical overhaul.

Lesson of the Day: "How to destroy mankind?" 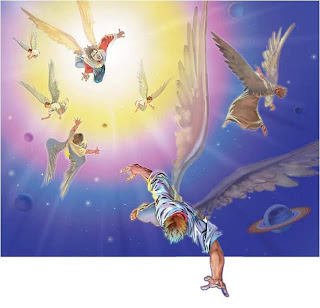 There is a fable that speaks of three apprentices demons that came to earth to finish their apprenticeship.

They spoke with Satan, the prince of demons, about their plans to try and ruin mankind.

The first said: "I will tell them that there is no God." Satan said - "That will not fool them, because they know there is a God."

The second said: "I will tell them that there is no hell." Satan replied - "You will not fool anyone this way; they already know there is a hell for the sinner."

There are things we cannot postpone. Beware, for your tomorrow may be too late for God's today.

But the Son of God came to destroy the works of the devil. 1 Jn 3:8

Folks, this is it. Today is the day. I haven't much to say. Nevertheless, one thing must be said: 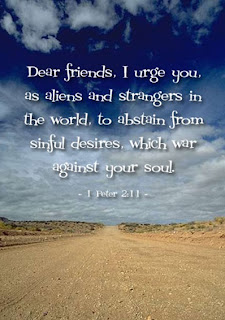 And this is me from tonight onwards...

What about you? Where will be tonight at 10PM?