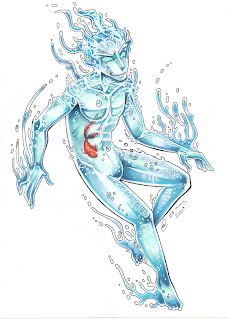 If you pour the same quantity of water in vase of different shapes and forms, the water will take different shapes.
Many youths are like water. They take the form and shape of the places they go to and the people they hang out with.
Recently, a member of our YPG in Houston told me that a young lady who she knew for a long time before coming to church, died in a car crash on a Sunday morning, around 3am. She was only 17. She was coming from a night club when the driver lost control of the car (a 20 years old young man who was apparently drunk and had no license to drive) and the car flipped over couple of times before going ablaze.
The interesting thing is that the YPG member was coming to church Sunday morning when she drove by the accident without realizing until later on Sunday that it was one of her friends who was in that car.
A moment of sadness hit her and, at the same time, relief. "Relief?", you might be asking. Yes, relief for not being in that car. She told me she was glad that she choose to be in a different environment. She had decided not to go to these places anymore and stick to her faith. The church and the YPG molded her in to a different young woman.
She could have been one of those youths in that car accident, which did not only kill her friend but another two passengers, all under 21. Only the driver survived and ESCAPED the scene. What a friend!
Friends, where have you been going? What places? And what kind of people you have around you?
Careful, they will shape you.
Pr Luke Castro
YPG National Coordinator.

Pastor Luke,
It's true of what you talk about. Though we may not think so but the people we hang out with and the environment we chose to live in shapes who we are and who we become. We need to get out of situations that we know is not good for us but stick to what is right for us. Like how this youth chose to go to church that day instead of hanging out with her friends at a nightclub. Thanks

We must only be shaped by God, and when that occurs, we should be able to help others come to God and also be shaped by Him. We are not like an other youth out there, we are chosen to overcome and succeed, to spread God's perfume and Glory wherever we go.

Interesting analogy, but sad reality. Youths nowadays are like water and just go where the "flow" is. I'm really glad that this one youth member didn't become just one more statistic but was above the influence.

This is true, all the places we go they shape us in someway, and we have to be careful with that, because sometimes many youth are like "church? i dont want to be there" but that is the best place to be, were we are shaped to be a women or men of God, where we are not in risks of this world, because we may think that all this so called fun lastes for ever but it wont, like this youth that now they are dead.

This is incredible to see how youth can be so influenced to the point where theyre life turns to tragic. we must reach out to them so that less and less go out into this horrible world

This is very sad reality. Maria was not a bad girl, she was our Junior class president, in National Honor Society, National English Honor Society, in AP classes, taking college classes part time, on the soccer team, and even planned on graduating early. She was a VERY determined girl, but just like this message says, the places we go, and the people we hang out with, are bound to shape us. It's inevitable. And because of one wrong turn she took, it ended her life. It's very sad to hear, but it's the honest truth.

Sometimes we think we can handle being in that environment, but once in it too much, we are bound to take that shape. We, the youths, must be especially aware of this. The world we are growing up in is appealing to the eye, but harmful for everything else.

Thank you for this message Pastor Luke.

I was sad to hear about the accident. It is so important that we show the youths out there what their lives can be like with God and set the example.

It's true, where we decide to be describes who we are, and also the friends we are around. This scenario you gave of the friend just leaving after the accident just makes us realize how at the hardest times we truly realize who are friends are, that's why we always need to choose carefully, because they will make you or break you! Thanks for sharing Pastor!

IT IS VERY TRUE THAT SAYING OF "TELL ME WHO YOU'RE WITH AND I WILL TELL YOU WHO YOU ARE" THE PEOPLE WE HANG OUT WITH SOON OR LATER WILL INFLUENCE US TO DO WHAT THEY DO, AND OUR ACTIONS WILL BRING THEIR CONSEQUENCES. THIS GIRL COULD HAVE PREVENTED THIS FROM HAPPENING (SHE WILL STILL BE ALIVE ) IF INSTEAD OF GOING TO A CLUB SHE WOULD HAVE BEEN WITH THE YPG MEMBER IN THE CAR GOING TO CHURCH. WE CHOSE WHAT WE WANT FOR OUR LIFE, SO WE NEED TO MAKE SURE THAT WE CHOSE TO FOLLOW THE RIGHT PATH.